The US Presidential Election takes place in less than two weeks, on Tuesday, Nov. 3.

The College Dems got up and running last fall, and this happened largely in response to the creation of the College Republicans during the previous semester: “I just saw a need, and I started this!” said Daffin.

The College Republicans was set up in late spring 2019. Saunchegraw, from St. Louis, remembers the difficulty that he had in getting a faculty member to advise the club, which is required to set up an organization on campus, “I went through three faculty members; they all turned me away. And then I went to Mark Foster, my accounting teacher, and he was like “Oh absolutely, I would love to do that.”

“I think that colleges all across the country are being fed this mainstream, ‘one way or the highway’ way of thinking,” he added. “It’s all the liberal way of thinking. All the professors are just shoving it down everybody’s throat. Nobody gets to think for themselves. And I think at some point we need to have that freedom of speech back.”

Despite their political disagreements, both Daffin and Saunchegraw are quick to point out that they are glad that the opposing party has a presence on campus. Both recognize the need to come together if anything constructive is to take place. 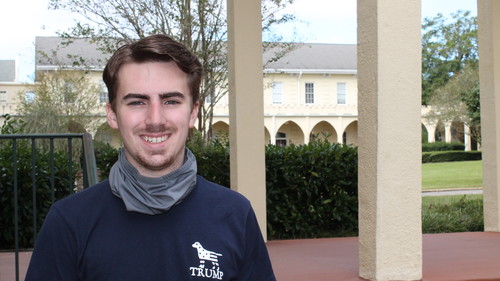 Spring Hill College is making a switch from Schoology to Canvas as their learning...

SHC Italy Center Back in Business Next Fall

After a full year of the Italy Center being closed, Spring Hill...

Spring Hill College is offering the second dose of the COVID-19 vaccine on April 30...